An Evening of Musical Comedy 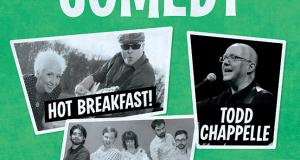 Join us at the Smyrna Opera House for "An Evening of Musical Comedy" with Hot Breakfast!, Mean Wendy Band, and Todd Chappelle.  Tickets are $16 general admission, $14 members, senior citizens, and military.  Content may not be appropriate for children.  This is a cooperative presentation of the Smyrna Opera House and Gable Music Ventures.  A full bar will be available.  The show starts at 7:00 pm.  Doors will open at 6:15 pm.

The Mean Wendy Band is a Philadelphia-based comedy band with roots in both music performance and sketch comedy. Lead vocalist and Philadelphia improviser, Wendy Lenhart started writing original songs in 2014 and soon collected a “Man Band” of fellow comedians and musicians to join in the fun.  Her handsome and talented Man Band features Ryan T. Barlow on bass guitar, Brian Kelly on congo drum, Dan Kristie on lead guitar and Zachary Wisely on additional vocals, keyboard, acoustic guitar and whatever else he is asked to play. Mean Wendy Band songs grow collaboratively between Wendy and the Man Band and showcase a variety of musical genres from the crooner years of the 1950s, some smooth 1970s-inspired singer-songwriter tunes to a somewhat misdirected childrens’ song.  Mean Wendy Band has appeared at musical and comedy venues throughout the Greater Philadelphia area and most recently performed at the People’s Improv Theater in New York City for Sketchfest 2015. The Mean Wendy Band would like you to know that if they don’t have anything nice to say, they don’t say anything at all….except when they’re singing. Despite the intentions of their name, they are really quite nice people. Visit them at www.meanwendyband.com.

Todd Chappelle is a local comedy songwriter who does a mix of funny original songs and parodies. His music is influenced by such artists as Weird Al Yankovic, Tom Lehrer and Mark Russell. Todd’s songs have been heard on Good Day Philadelphia, CNN Radio, the BBC and The Dr. Demento Show.  He appeared in the 2015 PBS specials "Dela-Where?" and "Dela-Where 2?", and his song parody I'm From Delaware was used as the theme song for both programs. With a quick wit and a powerful voice, Todd is a dynamic live act who has performed his humorous music at the New York Funny Songs Festival, the Philadelphia Funny Songs Festival, the Chicago Comedy Rock Festival, and numerous local venues. He was also the winner of the "Delmarva Folk Hero" contest at the 2015 Delmarva Folk Festival.  Visit him at www.toddchappelle.com.

POSTPONED: An Evening with the Stars starring The Edwards Twins