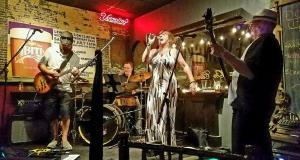 Judy Mangini- "Powerhouse vocals!!"  "What Chops!!" "What Pipes!!"  "WOW" are some of the descriptions people have used after hearing her sing! Judy is the lead vocalist and percussionist of Judy Sings the Blues and with her tremendously powerful and wide range vocals, she will draw you in from the time she hits the stage. She sings with passion, strength, clarity and feeling and not only do you hear the story, you feel it too. She has been singing in area bands since she was 16, but truly loves and enjoys singing the Blues. Growing up, performing is the only thing she has ever wanted to do and she has been writing her own songs since her early teens. Even though she has her own style and sound, she has been compared to Ann Wilson (Heart), Janis Joplin and more. Do yourself a favor!! Go check out Judy Sings the Blues !!!

James Sudimak is the drummer for Judy Sings the Blues and has been playing drums since age 11. He attended The New School For Jazz & Contemporary Music in New York City from 2011 to 2013. Currently based in Sussex County, Delaware and is emerging in the local music and community theatre scene. Other interests include video games, art, and computer programming. He has the dynamics of a drummer who has been playing for decades! With impeccable ability, style, timing and rhythm, he is the icing on the cake for the band!!

Carl Thompson, bass player, vocals, is affectionately known as "Smiley" to those that know him and see him on stage. He has been playing in local bands for over forty years and you can tell he loves what he does!! He started out playing the clarinet in school, but did not enjoy it. So, his music teacher suggested he play the tuba, a "stringless bass" which he did, but soon there after, started showing a big interest in wanting to learn a bass WITH strings! Pretty much self taught, he is one of the finest and most solid bass players in the Delmarva area and exhibits feeling and expertise in every thump of every string. Providing a rich, mellow tone, rhythm and groove that shines through every song. A truly gifted bass player!

Lin Doughten, Lead guitar, comes from a family of musicians that span five generations. The jazz, blues, soul and rock that he grew up on strongly influence his fluid guitar style. His “less is more” approach is out of respect for the blues guitar masters he admires. Lin has been a staple on the Delaware/Maryland club circuit for over twenty-five years as a member of bands such as Freedom, Alibi, Backstage Pass, Nozmo King, Fatback Blues and the Shakers. He has backed up and opened shows for international blues and soul recording artists Johnny Rawls and Sidney “Guitar Crusher” Selby.

A cash bar will be available.

Tickets are $16 general admission, $14 SOH members, senior citizens, and military, $8 children 12 and under